The yellow wooden bridges go over the other walkway. They are built so no one can hide under them. There are fewer paths and walking barefoot is encouraged.

Swimming in the pond is encouraged. There are three life guards for this pond during the ‘day’. The life guards work for the Amusement Park.

The three buildings are fantasy styled open-work buildings. They are sponsered and maintained by the Amusement Park, but this isn’t generally known.

The large structure, with trees, is designed to look like an elf house. The small pond is 2 feet deep. Wading is encouraged. Also sponsered and maintained by the Amusement Park.

The small ponds don’t have any fish in them. Wading is encouraged.

To reduce monotony, the benches and street lights are moved to different locations at random intervals. Computers make sure no large areas become dark and shadowy. Some of the benches slowly sink to the ground, if anyone sits on them for longer than 20 minutes. This is to encourage exercise.

The three orange/red striped circles are carousels. Also sponsered and maintained by the Amusement Park. Their logo is on them. The carousels only run during the 6 hour ‘day’. The ‘day’ for forest 1 and forest 2 overlap only occasionaly due to a random timer that is used randomly to start the ‘day’ in forest 2. The two carousels near each other use the same sound system.

Some 30 Amusement Park employees work here. Five for each carousel, and the rest are cleaners. Eight security guards and five medics are also here. There are 3 vendors of food and drink here. Twelve restrooms are located in this park. Any one working here can call for backup.

The Security building is also a small medical clinic. Any police-type or medical emergency gets a quick response team there in less than 5 minutes. There are 3 holding cells for minor crimes. Major crime doers get taken to the nearest security rooms outside this forest.

There are large area overhead lights. The lights here cycle on a 9 hour timer. Sparkling lights play across the ceiling at park ‘night’. They are obviously not stars, anyone can see the stars from an observation deck, but make patterns like waves moving across the sea. Sometimes a smiling moon, or three, float across the ceiling. If you think the moon waved to you, mention this to any Amusement Park employee, you could win a free ride ticket. No work hours at the Park need to be exchanged for this ticket. For those who don’t want to work in the Amusement Park as employees to earn ride time, they can sit in their dorm, or room, and watch movies.

There are a large number of LEDs that can be serviced from the deck above that make up the moons and the moving lights. The daytime lights are like a noon-day brightness. 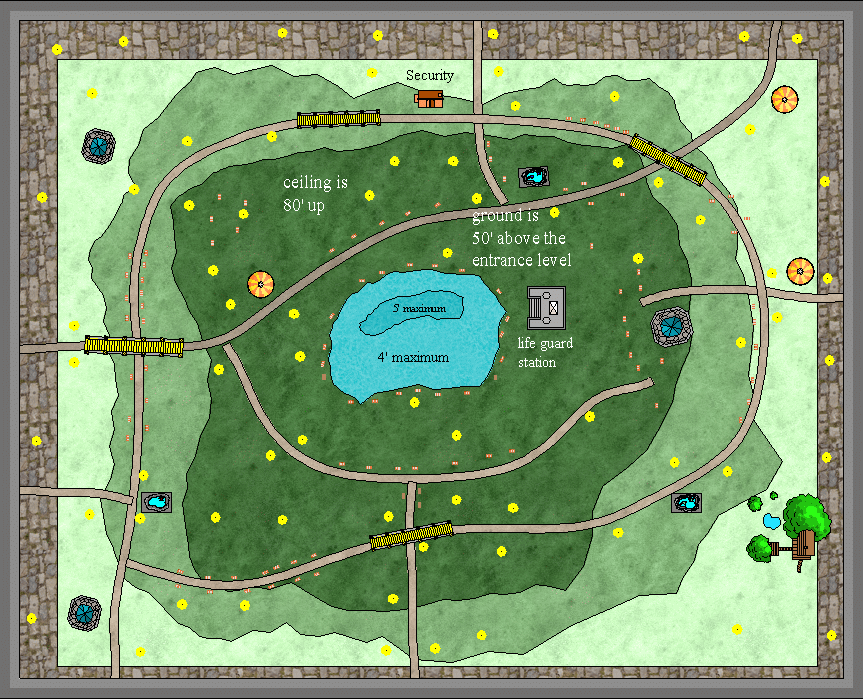